There is considerable hesitancy in the healthcare industry to rely on statistical sampling for questions deemed subjective in nature, or when the sampling units in a population might be considered too unique.  This generally manifests when attempting to extrapolate liability in litigation, particularly in FCA matters.  For instance, conclusions about a patient’s medical eligibility and/or the medical necessity for hospice care have been disputed in recent years when sampling analysis was the basis for such conclusions.

Two concerns are commonly cited when weighing the merits of extrapolating liability in these cases:

These concerns can be legitimate, and they can be so severe as to invalidate a particular extrapolation.  However, when sampling analysis is properly designed and executed, extrapolation can be an effective technique to answer questions involving medical decision-making.

Ensuring an Objective Examination of the Sample 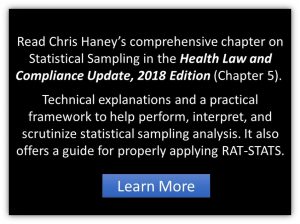 First, an analyst should ensure that the review of sampling units (i.e. the measurement) is, in fact, objective. An entirely objective and independent reviewer may support this goal, along with carefully documenting the criteria by which sampling units are evaluated by the reviewer. For instance, a hospice patient’s eligibility should be determined using published medical decision-making criteria, rather than simply relying on the provider’s subjective opinion. Illustrating how the reviewer explicitly considered each criteria, and why each patient did or did not meet such criteria can demonstrate how a seemingly subjective concept can be, in fact, objective.

Ensuring the Sample is Representative

Second, examining a subset of a population that is representative of the larger population enables analysts to objectively infer conclusions about the population, assuming all other steps are properly executed. While sampling units (i.e. patients) may be unique or diverse according to any number of characteristics, the analyst is primarily concerned with characteristics that might affect the measurements of the sampling analysis. For example, foot size might be a unique characteristic for a population of patients, however, we would not anticipate a selection of patients with disproportionately small feet to be more or less eligible for hospice care. The assessment of such irrelevant characteristics, or ignoring otherwise germane criteria could result in misleading conclusions about a sample’s representativeness.

Instead, the analyst should identify and document the characteristics most-believed to affect the measurements of a study, and then justify why those characteristics of the sample are representative of the total population. For instance, characteristics that could impact a patient’s hospice eligibility might include the original physician’s criteria for determining eligibility, or the facility’s processes and protocols for determining eligibility.  If those processes and protocols are consistent across the entire population, we should expect the sample to be representative, and therefore the conclusions to be useful.

If all relevant characteristics are consistent (i.e. representative) across the sample and population, and the examination of the sample is performed using standardized and documented criteria (i.e. objectively), sampling and extrapolation analysis may be a reasonable technique for estimating conclusions about medical necessity and/or medical eligibility.